I remember arriving in London for the very first time years and years ago.  It was part of a study abroad program for my English degree with the University of Washington, and 30 or so of us where there to study English Literature under the steady drizzle of Springtime England, the watchful gaze of Big Ben, and the excitement of a city that never sleeps. I’d never been out of the US except for a brief visit to Canada for the Vancouver World Expo in elementary school. I wrestled my bags off of the airport train at Victoria station, fumbled my way through buying myself a Tube pass with the still unfamiliar British pounds and pence, and took the Underground, which, once exiting the main part of the city, was very much aboveground,  toward West Ruislip, getting off in Ealing, per the very detailed instructions of my new landlady, Alice.

London was and is a place of mystery and cliche, of muddy, grimy mess against glorious pomp and splendor; of fairy tales, finance and hi-tech.  A city where people from every possible place on earth have come together, looking to escape one thing or to fulfill a dream for another. A city in which you are never really lost since every unknown street is a simple short walk from a big, red “U” shining against a bright background – a sign letting you know that you can descend beneath the depths of London and board a train which will in minutes, whisk you back to where you came from – familiar ground – or somewhere else you want to discover.

We were students on tight budgets, so we took the Tube all over the place, but walking and walking in between with London’s A to Z address book in hand (it’s now an app), looking for all of the landmarks we’d studied and dreamed about prior to making the trip:  St. Paul’s Cathedral, Westminster Abbey, the Houses of Parliament, Tower Bridge, London Bridge, London Tower, Buckingham Palace, The National Gallery and National Portrait Gallery, Hyde Park, Portabello Market and all the wonderful off-beat places in between.  Oh, I loved it then and I love it now.  Even after all of my travels, London remains one of my favorite cities in the world.

I was a coffee drinker arriving in London in the early days of Starbucks rise in Seattle and before the now inescapable green siren had taken over the world. I had a strong opinion about what good coffee should be. In London, coffee shops were still few and far between and only Seattle Coffee Company (purchased by Starbucks just as my London stay was coming to an end) with a handful of stores around the city serving the kind of coffee I wanted to drink. Tea, on the other hand, was ubiquitous, with every corner cafe and deli offering up a cup of Twinings or if in Harrods or one of the other better establishments, a fine, flavorful, looseleaf tea.

High Noon Tea was legendary to us, so we poor students splurged one afternoon on High Noon Tea at Selfridges.  Tiered tray after tiered tray was brought out to our table to accompany the steaming pots of tea:  each tray covered with a glorious and enticing selection of finger breads, petit fours, mini tarts, scones with clotted cream and jam.  The scones where perfect:  light and tender and just two bites large; perfect for holding a spoonful of jam and a dollop of clotted cream, and washed down with a sip of Earl Gray tea.  Scones became my favorite treat for nearly anytime.  Who knows how many I consumed during my three month stay?

Nowadays, I make scones a couple of times per month, maybe, but almost never do I make the simple cream scone that I first fell in love with during that exciting, rainy Spring in London.  My scones now tend to be packed with some kind of fruit:  raspberries & lemon; blueberries & lime.  Or with other ingredients that make me happy – like this one with chunks of pear and dark chocolate folded into a whole wheat dough. And I nearly always serve them with a cup of coffee.

Note: These scones (and all scones, actually) freeze extremely well.  I don’t like to freeze scones that have been already baked; instead I freeze them raw and cook them as I need them.  To do this, form the scone dough into a large circle about 1 inch thick.  Cut the circle into 12 even wedges.  Separate the wedges slightly, and freeze the whole batch for about 30 minutes. Transfer the semi-frozen wedges to an airtight container and put them into the freezer.  When you want to bake them, preheat your oven to 200°C/4°F and bake for 18 – 22 minutes, or until crispy and golden brown on the outside and fragrant with chocolate and pear.

Combine the flours, sugar, baking powder and salt into a mixing bowl.  Using a pastry blender or a fork, cut the butter into the flour until it is well combined and the mixture resembles bread crumbs.

Combine the vanilla and buttermilk in a small bowl; then pour the mixture over the top of the flour mixture.  Add the dark chocolate and pear chunks and mix with a fork until the mixture just comes together.

Transfer the scone dough to a large parchment-covered tray.  Press it down into a large circle about 1″ / 2.5cm thick.  Cut the dough circle into 12 equal wedges. Place the raw dough into the freezer for 30 minutes.

Remove the dough from the freezer.  If you are cooking all the scones immediately (if not, see the notes on freezing scones, above), use a spatula to separate the individual scone wedges and place them 2″/5 cm apart on a baking tray.  Bake for 20 minutes or until golden brown and crispy on the outside.

Allow scones to cool for at least 5 minutes. 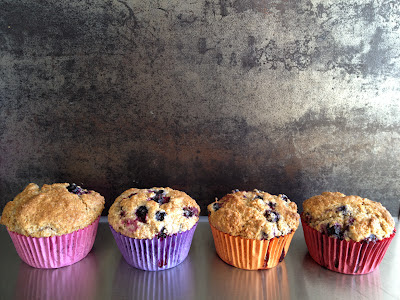 We enjoyed the Bilberry Muffins so much, that I thought I’d try a variation on the theme and use up some of the black currants in my freezer.  Black currants are something I’d never tasted nor heard of except related to cassis syrup (syrup made from black currants and commonly used in liquor), but in Finland most people who have a garden will also have several black currant bushes as well (occasionally they’ll grow red currants and white currants as well, but these are less common).  The plump, black berries are ready in mid to late August depending on where you are in Finland, and they have sweet/tart flavor that to me is reminiscent of both cinnamon and anise.  I made a black currant, lemon & star anise jam the other day to test the theory of how well the black currants would go with those spices, and it was lovely – though perhaps next time I’d use a little less lemon. Maybe I’ll post that jam here at a later date. 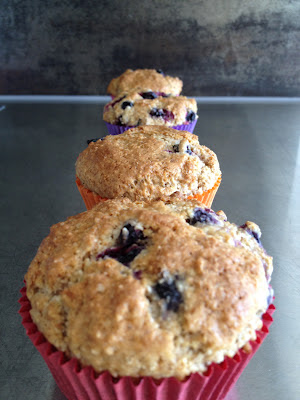 But I wanted to try black currants for something that didn’t include meat.  I also wanted a muffin that was dense, not too sweet – and healthy enough to eat without guilt for breakfast.  If you like a sweeter muffin, you’ll want to increase the sugar to 3/4, though I don’t think they need it.  The lemon balances the flavor of the black currants, and the cardamom is a very subtle but welcome addition, that you notice only after the second or third bite.  The buttermilk makes these nice & moist – if you don’t have it you can substitute a cup of runny plain yogurt or milk mixed with 1 teaspoon of lemon juice.

If you don’t have black currants, try these with blackberries.  I think the lemon & cardamom would go well with them also.  These freeze well, and you can keep them in an airtight container on the countertop to enjoy for up to 4 days. 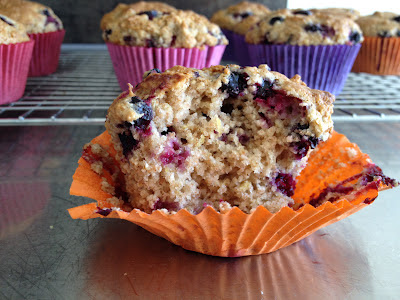 In a separate bowl whisk together:
1 egg
1 cup buttermilk
3 tablespoons of olive oil
zest of one lemon

Mix until the berries are distributed throughout.  Line a 12-cup muffin tin with cupcake liners and divide the batter evenly among the liners.  Bake for 25 minutes or until the tops are golden brown and a toothpick inserted in the middle comes out clean.
Remove from oven and allow to cool for 5 minutes before eating.