Nope, that’s not a typo.  I made Bilberry Lime Muffins. 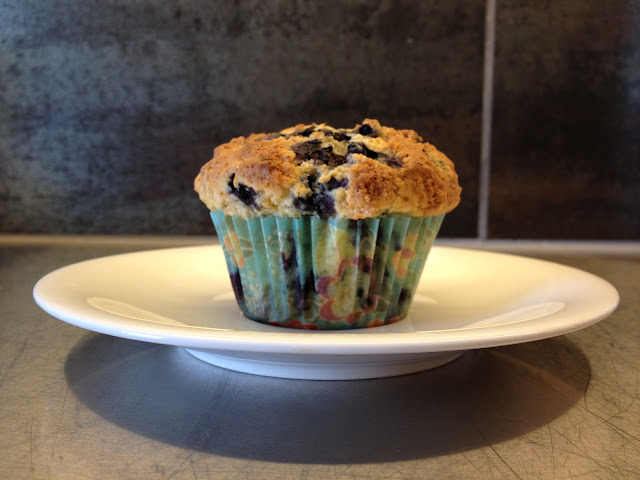 About 5 miles from where I grew up in Clearview, Washington, there was and still is a blueberry farm called Mountain View Berry Farm.  The farm has been around for years, and my family has gone there to pick blueberries for as long as I can remember.  We’d drive down to the farm in our big yellow Suburban with it’s 5-speed double clutch, pull into the familiar yard of the farm, load up with gallon size coffee cans that had been fitted with a stiff wire that could be hung from a belt to make the picking easier, and we’d walk down the hill to the blueberry patch, carrying big, white or blue 5-gallon pails.

It was huge.  The patch was huge, the bushes were huge and the berries were (mostly) huge.  We didn’t pick the itty bitty Rancocas – though the flavor was good, they grew too tiny and too sparse for our limited levels of patience.  We’d dive straight into the Concord and Stanley section, where the blueberry bushes stood much higher than my head (even now) and the berries hung like dusty blue grapes, waiting to be picked into our mouths (most common) or buckets.  We’d pick until our bellies and buckets were full, moving on (or starting in) into the section with the larger berries:  the Dixies and the Blue Crop and the Early Blues.  They were good days in the sun.

Back home, we packed them up into freezer boxes for eating during the winter, and ate handful after handful, all the way home and for the days after while the fresh ones lasted.

Mountain View Berry farm was my first employer, too, as it was for most of my siblings.  In the winter, I’d prune the bushes.  In the spring, we’d hoe down the weeds and horsetails growing around the base of the plants.  In the summer, we were joined by other kids, aged 12 and up, to pick the berries into buckets, pour them in to flats, which were then shipped off to grocery stores or bought by people stopping by the farm who didn’t want to pick their own.  I was a fast picker – my goal was to hold card #1.  It had no importance other than bragging rights, but hey, you take what you can get.  We were paid by the flat, and more flats meant more money for extra schools clothes beyond what Mom & Dad bought us.  These were good days in the sun too.

Many years later, I was asked if I wanted to go blueberry picking in Finland, that is, “mustikka poiminen”.  In Finnish, there are “mustikka” and “pensas mustikka”, which are both commonly translated as “blueberry”, with the latter being the domesticated blueberry found in some gardens in Finland, but not very common at all.  The “mustikka” is not a blueberry – it is a “bilberry”, found in the forests of Canada, France, and throughout Scandinavia, for example, and are a much tarter, bluer berry than I grew up with (and makes a much better jam & pie because of the flavor intensity in my opinion).

Off we went into the beautiful Finnish woods, armed with 8-liter red plastic pails in one hand and a plastic picking instrument in the other.  The berry picker has many plastic tines, like a comb that are attached to a bucket-like compartment that catches the bilberries as they are skimmed off of the bushes by the fork tines. The bilberry bushes grow close to the ground, with their berries scattered up and down the branches.  They are incredibly slow and tedious to pick by hand, and the Finns have cleverly invented an instrument that takes most of the work out of picking.  In a good patch, you can pick 8 liters (quarts) of blueberries in an hour – or one red bucket full.  The berries are then poured a little at a time on to a plastic mesh screen, through which the berry stems and leaves drop and the good berries are easily separated from the bad, quickly ready to use or freeze.   It makes for a perfect summer afternoon – especially in the long-awaited Finnish summer sun.

We have a lot of bilberries in our freezer from last summer’s pickings – it’s time to use them up!  You can use blueberries to replace the bilberries in this recipe, and they’ll be equally delicious. They come together really quickly, and are low-fat besides.  What are you waiting for?

These will store well in an airtight container at room temperature for 3 days – if they last that long.  They also freeze well.

In a large bowl combine:

In a separate bowl whisk together:
1 egg
1 cup milk or buttermilk
3 tablespoons of olive oil
zest of one lime

Mix until the berries are distributed throughout.  Line a 12-cup muffin tin with cupcake liners and divide the batter evenly among the liners.  Bake for 25 minutes or until the tops are golden brown and a toothpick inserted in the middle comes out clean.

Remove from oven and allow to cool for 5 minutes before eating.