February in Finland is cold.  Bone-chilling cold.  When I complain that we’ve hit -23°C in Helsinki, I quickly get notes from my friends in the north reminding me to count my blessings:  it’s -32°C in Oulu, I’ll hear, or -27°C in Jyväskylä.  This is too cold for human beings.  Or at least too cold for this Seattle girl, who thinks of February as the beginning of spring, particularly when reminded by certain dear friends living on the west coast that it is possible to see small blooms appearing outside already (you know who you are!), when all I can see for miles is a frozen, snow-covered landscape.

But today, the weather has warmed up, and it was -5°C.  Beautiful!  Sunny!  Skiing weather…and down on the shores of Uunisaari, apparently it was swimming weather as well.  At any rate, it was a balmy day by Finland’s February standards, so I went out shopping after enjoying a long girls’ chat with a good friend over a fresh munkki and a copy of coffee.  (Thanks A – it’s always good to catch up!).  I can feel the beginning of spring in the air, and the cheerful yellow tulips on my kitchen table give me hope that it’s not far away.  Spring in Helsinki doesn’t mean blooming tulips, though – it means longer, brighter, sunnier days, when the snow glints off the frozen land and sea, and sports enthusiasts get their boots on to enjoy the prime weather.  It’s a beauty all its own.

Wandering through the small boutiques in Eira, stopping for coffee and quiche at Cafe Succes (that’s not a misspelling btw), in and out of organic food shops and my favorite chocolate Chjoko, I came home with, among other things, two fresh potato rieska from Eat & Joy Maatilantori’s shop in the Kluuvikeskus, baked this morning in their brick ovens, and as beautiful as could be.

After all that wandering, I was definitely hungry, but not in the mood for starting from scratch. Using the rieska as a base, I took advantage of the fresh winter pears and pulled together a quick meal for a lazy Saturday night.  It took longer to warm the oven to 250°C than it did to put the rest of this together, so this one will be returning to our table in near future.  Easy.  Delicious.  It disappeared quickly. Nothing left but a drip of olive oil as evidence…

Rieska isn’t available outside of Finland, though you can make it yourself.  If you don’t feel like doing that, a soft flour tortilla could work, or else some thin flat bread or use the same topping on a pizza dough.

Potato Rieska / Perunarieska
If you can’t buy your own, or are feeling ambitious – they are actually pretty easy to make.  From Parasta Kotiruokaa  by Aura Liimatainen.  For another recipe and pictures, check out Scandic Foodie‘s recipe.

Nothing beats fresh rieska baked in a stone oven, but if you heat your home oven to it’s maximum heat, you can still get pretty decent results.

In a bowl, mix together all ingredients until the come together to form a smooth dough.  Divide the dough into two parts, and on a large pan covered in parchment paper, using hands covered in flour, form the dough into oval shaped rounds about 1/2″ thick.

Bake in the oven for 15 – 18 minutes until golden brown.  Remove from oven and cool. 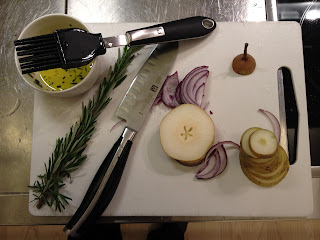 
Heat in the microwave for one minute, and set aside.

Place the rieska on a pizza stone, or place on a parchment paper.  Brush the olive oil mixture over the top of the rieska.  Top with the pear, red onion and then blue cheese sprinkled over the top.  Toss a few fresh rosemary leaves over the top and place in the oven.  (the parchment paper can be placed directly onto the wire oven rack.  Bake 8-10 minutes or until slightly golden brown.  Serve immediately.